Joined Feb 7, 2008
·
1,667 Posts
The old Metropolitan/GWR tie-up used steam locomotives through Paddington, before EMUs became the norm. The Bo-Bo's, as modelled by Heljan, dated from 1920/21, and were used almost exclusively between Baker Street and Rickmansworth, where they were removed from their trains and steam locomotives took the train onwards to Amersham or even Aylesbury in early days. After electrification to Amersham in 1960, the A60 stock took over services all the way from Baker Street to Amersham and Chesham, and the Bo-Bo's were retired, with a couple being preserved. The LT lines onwards to Aylesbury were transferred out of LT hands somewhat earlier than this.

No 12, Sarah Siddons was for a while officially the brake block test locomotive, a neat way to preserve a locomotive in operational condition without actually "officially" preserving it!

The Heljan model is superb, and as we expect from this manufacturer, they run very quietly and smoothly, and have more than enough power to haul any stock we would deem suitable - mine are only expected to haul five lightweight coaches (Graham Farish non-gangwayed coaches painted brown).

I bought one at full price when they first arrived (No. 8 Sherlock Holmes), but like the OP, I succumbed t temptation when the bargain priced ones appeared for Â£74, so bought No 12 Sarah Siddons in preserved Met livery as well. 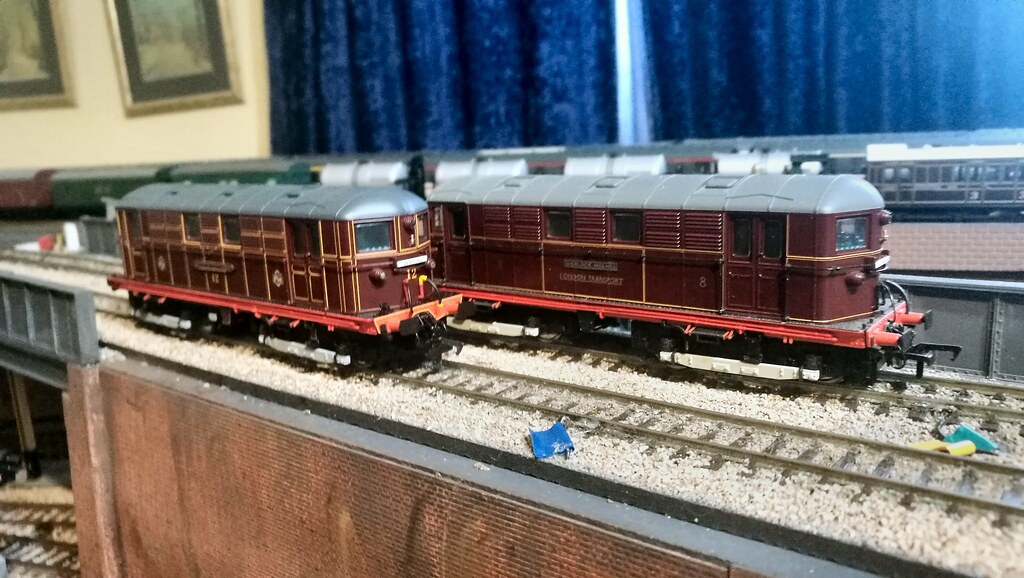 As a small aside, both of mine had the same minor fault, where the lighting boards for the top marker light and cab light were inserted upside down (both ends of No 8 and one end only of No 12); this was very easily fixed!

Originally, the Dreadnought coaches and the almost identical dedicated sets used with the T Stock that were used for the Amersham/Aylesbury run were in varnished teak, but they all got overpainted ina darkish brown later in their lives. There are Dreadnought kits available from Radley Models but they are a little dear for me at present, whereas I was able to find some Farish coaches that sort of looked the part for very little cost. I have to say that the Farish coaches are wrong in just about every single detail, but that they actually don't look out of place when seen running. I have fitted them all with metal wheels, but otherwise all I have done is paint them in various shades of brown before settling on one shade that I think looks better than the rest (the photo reflects the experimental shades). They would benefit from closer coupling, and I will eventually hack the brake coaches to resemble the Met coaches a little more closely. 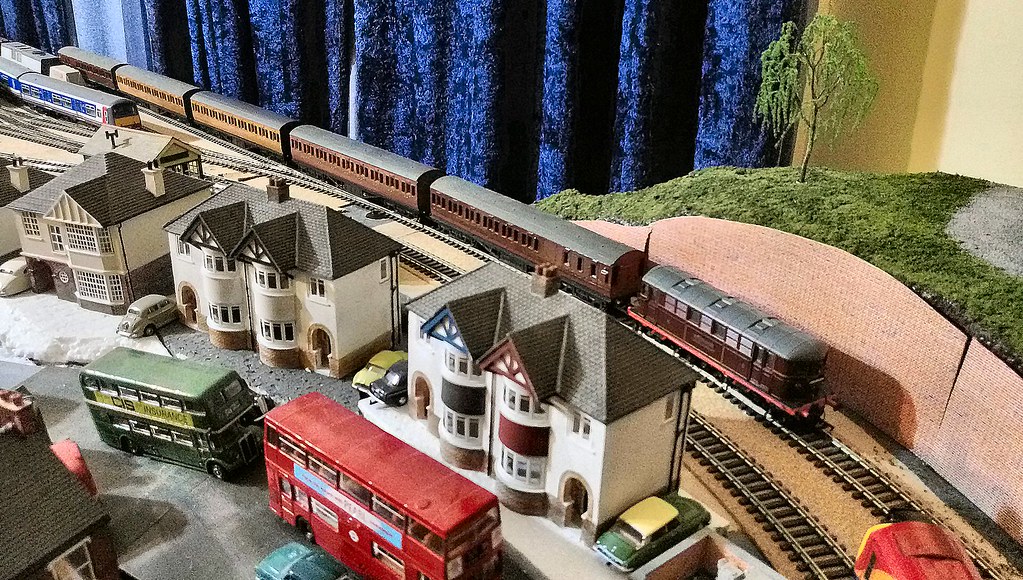 Joined Feb 7, 2008
·
1,667 Posts
QUOTE (PeterPug @ 7 Aug 2018, 23:40) <{POST_SNAPBACK}>Thanks SRman, interesting stuff. My copy of British Electric Trains ((H.W.A. Linecar, 1947) has a photograph of No 1 at Rickmansworth with the Liverpool St. to Aylesbury train - and it mentions that the change to steam power was at Rickmansworth too.
I did come across a comment about the lighting boards being fitted upside down on 'another forum' - not sure if I'd notice as I'm running on DC - how can I tell if it's the case?

The comment on lighting boards may well have been one of my posts elsewhere.

On plain DC, I'm not sure anyone would notice the difference as all lights come on at once anyway. It is quite possible there are many of these locomotives running around with the PCBs upside down, but no one will notice.

Joined Feb 7, 2008
·
1,667 Posts
What didn't look at all bad behind mine when I took it to a friend's layout were some Hornby LNER non-gangwayed coaches in varnished teak finish. Again, totally inaccurate but from a modelling point of view, it looked right.
1 - 4 of 4 Posts
Join the discussion
Continue with Facebook
Continue with Google
or sign up with email
About this Discussion
27 Replies
7 Participants
Last post:
petmar 6 mo ago
Model Railway Forum
A forum community dedicated to Model train and railway owners and enthusiasts. Come join the discussion about collections, displays, models, styles, scales, motors, reviews, accessories, classifieds, and more!
Full Forum Listing
Explore Our Forums
OO Gauge & 4mm Scale DCC On My Layout The Station Concourse Tracks, Layouts & Scenery
Recommended Communities