Joined Aug 20, 2005
·
4,531 Posts
Just a reminder that members of the Trust have put together several videos, as we shall not be open this month for Heritage Open Days. Go to www.sigbox.co.uk
- this takes you to our 'Home' page containing the links to the various videos. They are:
The Garden and our signals (9mins)
How it works (The upstairs operating floor demonstration) (13mins)
The Museum (includes the Tyer single line tablet machines) (11mins)
The Garden Railway - aimed at our younger viewers (5mins)

Joined Aug 20, 2005
·
4,531 Posts
Just completed a major update of the news page on our website - see http://www.sigbox.co.uk/sigbox/news.eb - describing some of the work done in the last three months and also some new acquisitions.

Our videos have now notched up over a thousand viewings, by the way.

Joined Aug 20, 2005
·
4,531 Posts
The News page for 2020 - see http://www.sigbox.co.uk/sigbox/news/news%202020.eb - was updated on the 26th of November with photos of further work done in the past month. This includes a token holder formerly at Chesterton Junction where the St Ives branch turned off, and which has been re-erected in the box garden.

Julian
Until we acquired this holder a couple of months ago I had no idea they existed. I've therefore no idea (1) when they came into use; (2) how widespread they were; (3) why it was used at Chesterton Junction in particular. Old maps show the box was on the opposite side of the line, so perhaps it was to minimise the time the signalman was outside the box? Quite likely therefore that for trains coming off the branch the signalman collected the token from the enginemen directly as was more usual. The GWR in particular had a collecting horn which the token was dropped off onto for later collection by the signalman.
This photo shows the SR (or BR?) version (click on photo to go to the larger original):
Worgret Junction - dropping off the single-line token 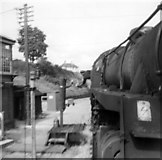 Â© Copyright John Webb and licensed for reuse under this Creative Commons Licence.
Apologies that the quality isn't brilliant - moving train and on an old two and a quarter inch square 120 film camera!

Joined Mar 31, 2011
·
2,684 Posts
There were a number of different token exchange designs at various times around the national system.
The GWR one was potentially the most common and possibly the most long lived. Their design catered for both delivery of the "used" token of the Section being exited and collection of the token for the forward section about to be entered.
Deposit/collection of tokens with fixed equipment was both safer - certainly for the signalman - and avoided the train having to slow down as much for the exchange. I don't recall the exact speeds allowed but (don't quote me) I think the exchange gear could be used at as much as 20mph... A speed that no-one would want to make an exchange by hand!
The Llangollen Railway has a very good example at Glyndyfrdwy - just where the passing loop starts on the opposite side of the line from the Box. I have seen this combination of drop-off and collection equipment used. The GWR system included a 3rd part - a large rope net after the collection arm - to catch any token that missed the arm... Clearly a better option than having to search for a token in the lineside vegetation.
When I was a kid I heard a tale of a young fireman who so messed up an exchange that the token (and holder) bounced and flew over the side of a bridge and into a stream... The "culprit" had the task of wading in and retrieving it.

In later years "automatic" token exchange apparatus was fitted at least on some BR locos - There is at least one model of a loco fitted with the gear - I think a smaller Standard Class - ? made by Bachmann?

In 2015 the West Somerset Railway had the ground based gear of a pattern of exchange apparatus at Washford. Slightly oddly this is on the single line through the platform and part way along the length of the platform with no immediate access in either a board crossing or a step in the face of the platform.- however, this did put it very nicely where it could be photographed.
An Electric Token Block (ETB) Block Post at a location with no passing loop is not as odd as it might sound. It acts in the same way as a Section Splitting box on Double Track - enabling trains to follow more closely - that is - it cuts a possibly long single headway into two shorter headways.

It did have to be kept in mind that such an ETB Block Post should not accept a train from both (opposed) directions at the same time - even though the token instruments would be capable of doing this... As proved at (IIRC) Waddon Marsh on the West Croydon-Wimbledon line on one occasion in my experience. (Wasn't me!).
A completely different feature of that route was that, running 2 car EMUs the fairly long level crossings could cause a slow moving unit to become "gapped" on the crossing.
Much more obscurely - where London trams ran on the plough system for power collection a tram could also end up gapped where the plough had to be lifted for one line to cross another... I know this because, according to family legend, my Mum's Dad achieved it and completely jammed up traffic at a junction until a following tram could come along and shove his tram forward to where it could collect powere again.

Joined Mar 31, 2011
·
2,684 Posts
Further to "tablet exchangers"...
I have just stumbled on an item in Railway Magazine September 1963 (P639) which shows the gear on a diesel type 2 loco at Inverness and also, interestingly, on a DMMU od Scottish Region. The latter has pretty good views of the gear in both the closed and working positions. The former is interesting because it also shows gangway bellows between two class 2 diesel cabs - the other loco is D5124 .

Joined Mar 31, 2011
·
2,684 Posts
I was under the impression that John had raised the subject of detonator placers rather than token exchangers... Perhaps that was longer ago than I realised?

These old films are interesting in their own right but also have so much going on in the background.

One thing that I notice is the age of most of the men in nearly everything pre 1960. I imagine that this is a consequence of the 2nd war and post war conscription. Something that, from a modern perspective, makes me shudder is the way that they stroll about the track and stand casually in what would now be considered dangerous positions. I imagine that this relates to three things - 1. the relative noisiness of steam trains (although they can coast near silently) 2. possibly that jointed track would provide a bit more audible warning than CWR does. 3. the possibility that, for filming at least, the men would have had some benefit of signal protection.

Joined Aug 20, 2005
·
4,531 Posts
The latest lockdown means that we have had to return to those within walking distance of the box calling in on a 'care, maintenance and security' basis, thus losing momentum again on our various projects. Fortunately I've two gas lamps and a two-aspect signal sitting in my loft workshop undergoing restoration to keep me occupied!

Bear 1923: Thanks for a mention and observations on the old BR and other films.

Joined Aug 20, 2005
·
4,531 Posts
The recent Corona virus recovery 'Road Map' laid out on Monday Feb22nd looks like keeping us closed to the public until later this year. While indoor attractions, such as museums, can reopen in mid-May, 'social distancing' still needs to be maintained, and the narrowness of our box (10ft/3m less fixed equipment/displays) prevents this. So we may have to wait until the social distancing rules are relaxed, whenever that may be! The only upside of this is that we may be able to get the box exterior repainted before reopening without having to worry about having the public about!

Joined Aug 20, 2005
·
4,531 Posts
It was hoped that yesterday's (June 14th) announcements would have enabled us to start planning opening dates later this year. But the putting-off of removing the 'social distancing' requirements has scuppered that! We (the Trustees) continue to keep an eye on things.

Meanwhile our contractors in the mostly good weather have been getting on with the external repaint of the box. I'll be posting pictures of their efforts at http://www.sigbox.co.uk/sigbox/news/news%202021.eb later this week, plus a few more new additions to the exhibits collection. There are also the five videos available from the home page of our website; another video of some of us volunteers showing what we get up to and why will be available soon. (Warning: it includes me!)

There will be, hopefully, EXTENDED OPENING Sat/Sun September 11th/12, 10am to 5pm for HERITAGE OPEN DAYS. In addition to our usual displays there will be some special features.

Full details at our website www.sigbox.co.uk - all open days subject to any Government directive, of course!

There is no booking required but we have placed a limitation on numbers at any one time in the ground floor museum room as this has no natural ventilation, other than gaps in the lapboarding.

The video of our volunteers is now viewable from the home page - WARNING: I'm at the end!

Joined Aug 20, 2005
·
4,531 Posts
News from St Albans South
Open Days in 2022
We resume our 2pm-5pm openings on Sunday 9th January, and continue on February 13th and March 13th.
We are waiting on information from other people before firming up dates for later in the year in order to link in, where possible, with national events.
There is no advance booking required, just turn up. Full details at our website www.sigbox.co.uk - all open days subject to any Government directive, of course!

The Box celebrates its 130th Birthday on June 12th and hopefully there will be appropriate celebrations!

A look back at 2021
We reopened on July 25th and our last Open Day on December 12th with 17 visitors brought our total for the year to 903 visitors. During the year, despite Covid Limitations we achieved:
See our 2021 newspage for the details and numerous photographs.

There is no advance booking required, just turn up. Full details at our website www.sigbox.co.uk - all open days subject to any Government directive, of course!

Joined Aug 20, 2005
·
4,531 Posts
Latest news from St Albans South can be seen on our 2022 News page including details of our latest acquisition, a rare North-Eastern Railway Slotted Post signal, rescued from a garden in Sheffield.

Please note that the 12th June Open Afternoon, while being the 130th 'birthday' of the box, will not be a public celebration of the occasion, although we shall have a few extra exhibits on display.